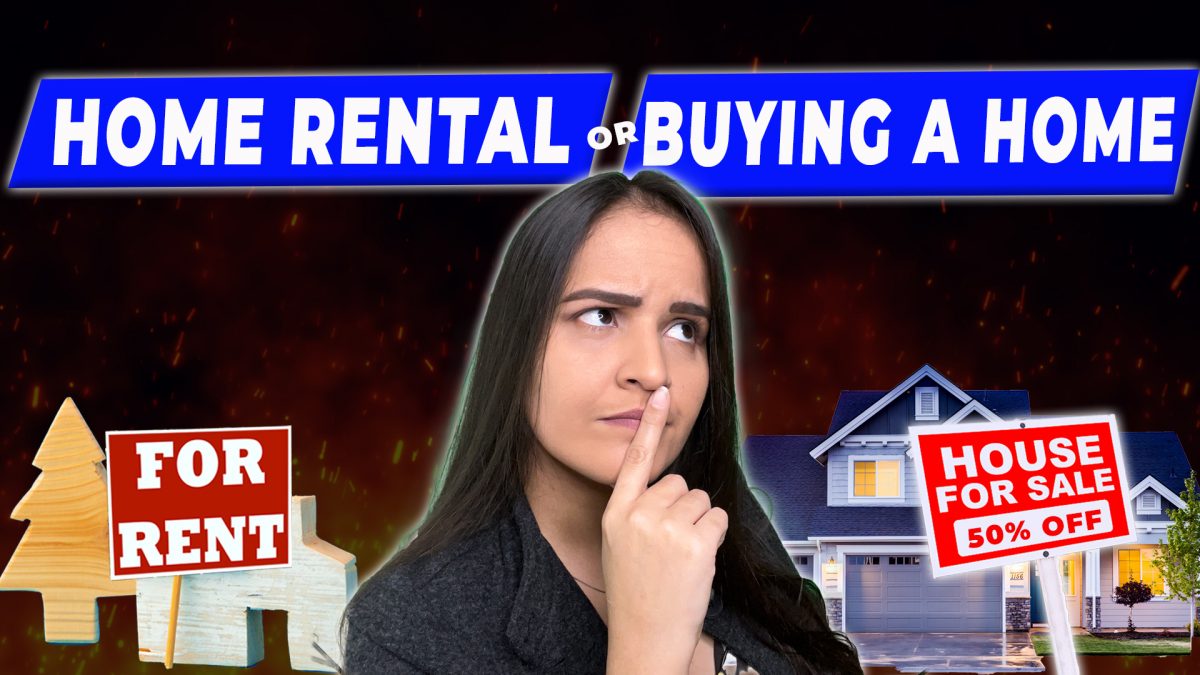 A huge number of residential constructions are headed to completion in the top 20 metro areas of the US being a great opportunity for people going for rentals and Miami has also made it to the third position in the list with the most number of constructions.

Let’s discuss this in detail…

A recent article by rentcafe.com states that in the US approximately 420,000 new rental units are projected to be completed this year and multifamily construction is at its historic 50-year peak.

Below is a graph showing the number of apartment buildings built nationwide over the years. In  1972 we saw the largest peak with 464K constructions and after that in 2021 with 423K and 2022 with 420K constructions, surpassing even the most far-fetched predictions for the post-pandemic multifamily market.

Of course, the 20 US metros by ‘Projected new apartments’, include Florida cities like Tampa, Orlando and Miami where new constructions are expected to be complete by the end of the year. 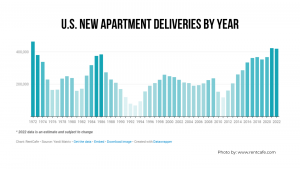 Miami may have had the most unexpected result in terms of multifamily constructions this year which is now considered the nation’s hottest apartment market. It jumped from the sixth spot from 2021 to third place in the current ranking list of the 20 metros of the US provided by Rent Cafe.  Miami, which was pushed back in 2020 and 2021 has made a great comeback and is now rebalancing really well. 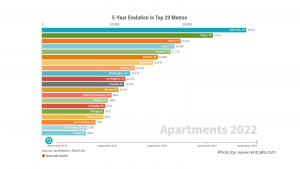 There will be a total number of 19,125 apartments in Miami FL. 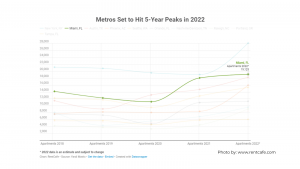 The graph below shows the building construction done in the first half of the year. Miami had openings of nearly 3,000 new apartments, but it wasn’t enough to quell the city’s soaring demand for rental housing. 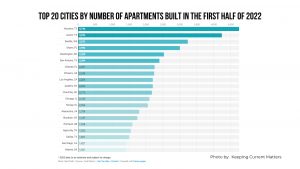 The city of Miami itself will see the most new rental units in the metro area this year by far – nearly eight times more than second place Fort Lauderdale, the report said.

Miami will undoubtedly see the most new rental units in the metro region this year, with roughly eight times as many as Fort Lauderdale.

Rentcafe also reported earlier this month that Miami remains the most competitive market in the U.S. for renters. In Miami, “the existing supply of rentals simply can’t keep up with sky-high demand,” the website said.

However, in its competition the only cities with higher completion rates were Houston with 4,746 apartments , 4,236 in Austin, and 3,232 in Seattle.

RentCafe also stated that “Miami remains the most competitive market in the U.S for renters”.

Here are the 20 most competitive rental markets in 2022. Due to record-low availability of housing and a high occupancy rate, Miami Dade County has become the most heated rental market in the country and this is mainly because of the rising demand for apartments in South Florida.

Let’s see what the experts says:

The latest data by Rent.com shows the average rents right now in Miami. A rent for 1 bed it’s $3,010, $4,127 for 2 beds and $7,150 for 3 beds. I wanted to compare that with the MLS and I found that in Miami Dade County in the month of August, the median rent prices for condos and townhouses was $3,000 and for single family houses $4,000. There are factors and data we don’t have like rental communities data and other stuff but yeah, at least you can have an idea.

The latest data by Rent.com shows the average rents right now in Miami. A rent for 1 bed it’s $3,010, $4,127 for 2 beds and $7,150 for 3 beds. I wanted to compare that with the MLS and I found that in Miami Dade County in the month of August of 2022, the median rent prices for condos and townhouses was $3,000 and for single family houses $4,000. There are factors and data we don’t have like rental communities data and other stuff but yes, at least you can have an idea. 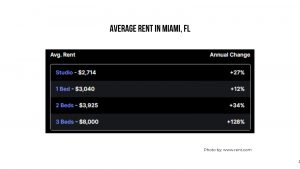 A real estate economist  in Florida Atlantic University Ken H. Johnson has predicted that in the best case scenario, the average rents could decrease up to $200 a month. Do you think this is true? What have you seen out there?

We know that these expanding constructions will be more beneficial for the rental market. According to all the data, a large portion of the population is moving toward renting in Miami and other parts of the country and the reason for some is the housing affordability problem. The increase of home prices and the mortgage rates keep the soon-to-be homebuyers in the rental market.

Now, comparing the price hike of both rents and home-prices, yes both are high. However, keep in mind that owning a home does have many benefits for you and your family such as saving on yourself from mortgage payments (avoiding yearly increases that you will get when renting), taking advantage of the home value as it increases, you are putting the money in yourself and so many other things. 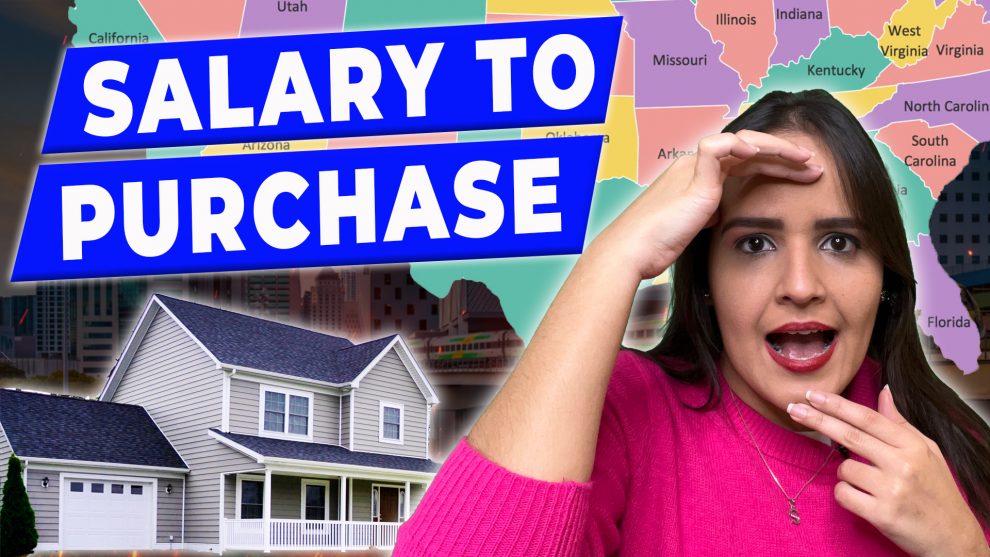 Will Housing Ever Be Affordable? 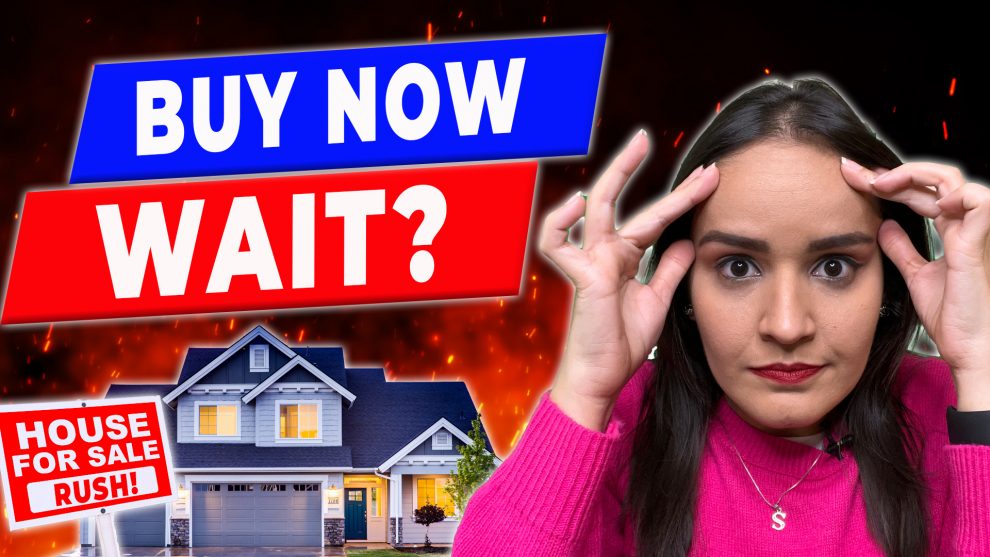 4 Reasons to Buy a House Today in Miami 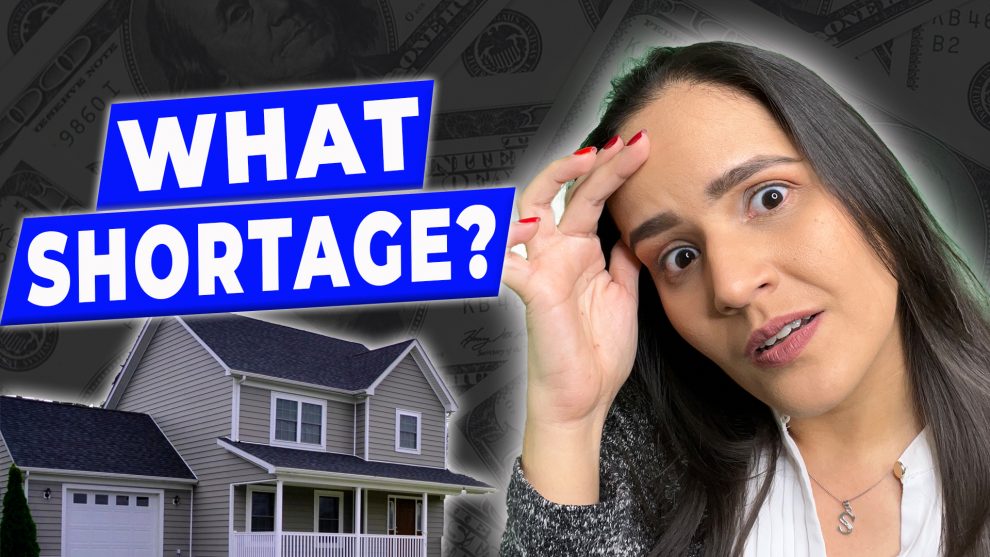